VACCUMING CARBON DIOXIDE AND TRANSFORMING IT INTO FUEL AND ROCKS 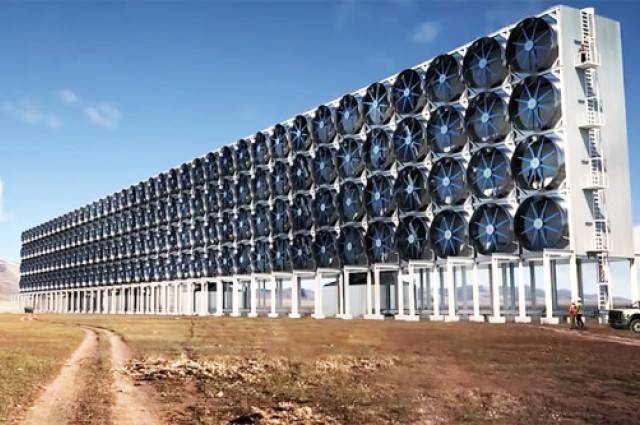 Carbon dioxide has been the epicenter of the pollution and climate change controversy for decades. Several international summits witnessed tough negotiations aiming to reduce its emissions. The latest was the so acclaimed Paris Agreement of December 2015.

Yet, as it’s often the case, scientists are making a leap ahead of the political prance, with a more elegant and disruptive solution: instead of reducing carbon dioxide emissions, let’s capture it and take advantage of it.

Two major projects are ongoing: the first aims to capture the carbon dioxide and recycle it into a fuel production process; the second aims to capture it and transform it into rocks.

Based in Squamish, British Columbia, the plant uses a carbon-absorbing mechanism similar to the one used by trees. David Keith, a professor at Harvard University School of Engineering and the executive chairman of Carbon Engineering, and his team have been experimenting the concept at a prototype at the University of Calgary for several years.

In the full-scale facility, the CO2 will be recovered from the carbonate solution and integrated into the production of liquid hydrocarbons that are fully compatible with today’s transport infrastructure. The commercial version is expected to be ready by 2017.

2. The second project is being done in Iceland and is called The CarbFix program. It aims to capture carbon dioxide from the Hellisheidi power station, the second largest geothermal heat and energy station in the world. The CarbFix system dissolves the carbon dioxide in water then pumps it into a basalt formation, draining calcium, magnesium and other elements from the nearby rocks then forming minerals.

Both projects are still facing several technical challenges. But it’s just a matter of time. When applied at a larger scale, the idea can offer humanity a genius definite solution to the climate change and pollution problems.