A large far planet is very probably orbiting the sun 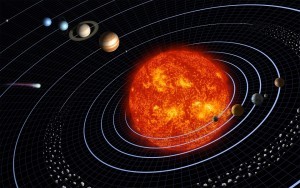 A recent research suggests that a giant unknown planet is orbiting around the sun. This ninth planet could not be observed with telescopes but its existence is deduced from its gravitational impact on the surrounding objects.

This conclusion has been stated by Konstantin Batygin and Michael E. Brown in their article: “Evidence For A Distant Giant Planet In The Solar System” published in The Astronomical Journal.

If confirmed, this discovery raises the number of planets orbiting the sun back to nine. In fact, in 2006, the International Astronomical Union in Prague decided that Pluto does not comply to the formal definition of a solar planet. Since then, the acknowledged number of planets in the solar system has been eight.

The formal definition of a planet is: “a full-fledged planet is an object that orbits the sun and is large enough to have become round due to the force of its own gravity. In addition, a planet has to dominate the neighborhood around its orbit.“.