Home Politics One Week Before Invading Kuwait, Saddam Sent an Ambiguous Message of Friendship to Bush

One Week Before Invading Kuwait, Saddam Sent an Ambiguous Message of Friendship to Bush 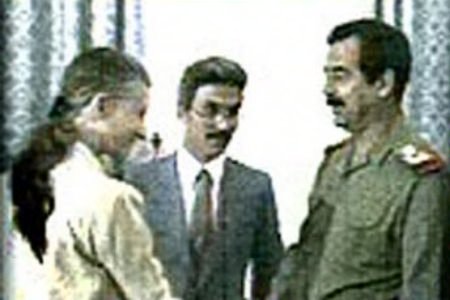 On Wednesday July 25th 1990, the Iraqi president Saddam Hussein met with the US ambassador April Glaspie. The ramifications of that meeting are still haunting Iraq, Syria, Iran and the Gulf countries until now.

Iraq’s economy was trudging under the heavy weight of the eight years’ war with Iran (1980 – 1988). In 1990, Saddam accused his neighbors, particularly Kuwait, of overproducing, causing the oil prices to fall sharply and the Iraqi economy to slide to the abyss. The affair was subject to several mediation efforts from the east and the west but all of them were vain.

The Gulf countries were acting from a pragmatic point of view. From 1980 to 1988 they had supported two very expensive wars: Iraq in its war against Iran and the Afghans in their war against the Soviet Union. From 1980 to 1988, their economies witnessed a radical decline, slashing over half of their GDP per capita. However, the Iraqi regime was seeing itself as the epic protector of the Arab nations from the so called ‘Persian’ imperialism. Based on Saddam’s vision, the Gulf countries owed him a heavy payback for having saved them from Iran’s threat.

During his meeting with the American ambassador, Saddam was very cordial. He tried to explain, in implicit manners, that Kuwait’s economic hostilities were obliging him to consider taking field actions. Ambassador Glaspie argued later that the excessive cordiality of the Iraqi dictator misled her to take his message as it is; with no tricky interpretation. In the very evening, Glaspie cabled Washington with a message headlined: “Saddam’s message of friendship to president Bush”.

During the discussion, Saddam went into a detailed analysis of the two issues behind the Iraq-Kuwait crisis: the first was that Kuwait was deliberately overproducing oil and keeping its prices too low. The second was the border disputes between the two countries.

In the middle of a technical argumentation, April Glaspie answered that the U.S “took no position on these Arab affairs”. Saddam interpreted it as a tacit greenlight to proceed. Within one week, the Iraqi troops brutally invaded Kuwait and annexed it as the 19th province of Iraq.

The misinterpretation of Glaspie’s answer was only the last piece in a much bigger puzzle. The Iraqi regime had had a stubborn ideological and geostrategic understanding of its war against Iran (1980 – 1988). For the ruling Baath party, Iraq had fought that war on behalf of the Arab countries and the United States, and succeeded to stop the ‘Persians’ from exporting their religious revolution. After having achieved its mission, Iraq needed either a generous financial support, or a territorial reward and a sovereign access to the Gulf sea.

The tricky ‘friendship’ message of Saddam to Bush translated into a relentless war in 1991, a decade of economic embargo, a full-scale invasion in 2003, and an endless labyrinth of chaos and brutality traversed by the whole region.