Richard Nixon seems to have had a key role in the strategy that led to the collapse of the Soviet Union.

After his resignation in 1974, Richard Nixon silently withdrew from the public sphere into his estate in San Clemente, California. Despite a reserved come-back in 1977, with a series of interviews and public-relations activities, he remained constrained and cautious.

Then, all of a sudden, he decided to have a full-scale come-back, encouraged by President Reagan, at the beginning of his second term, starting from 1985.

The activities of Mr. Nixon, in the second half of the 1980s, ranged from dinners with Washington journalists to international diplomatic meetings in the Soviet Union and China. He had also regular phone calls with President Reagan, who had a persistent interest in getting his advice, especially in foreign affairs’ matters.

Read Also: Nixon And Reagan Adviser Claims LBJ Killed JFK.
If we read the sequence of the events carefully, we would find that, apart from Reagan’s role, the swift resurgence of Richard Nixon had a curious link with the rise of Gorbachev.

One particular event adds further questions to the nature of that link. On March 11th 1985, Mikhail Gorbachev was selected as the General Secretary of the Communist Party. Two days later, on March 13th 1985, Richard Nixon makes a surprising and unprecedented decision. He requests to cancel the Secret Service detail that had accompanied him since 1974. He claimed that he wanted to save the taxpayers’ money, about $3 Million per year, allocated to his protection (report).

It looks as if he wanted to have more freedom, and less governmental scrutiny, before re-surging back into the international political realm. About one year later, in July 1986, Nixon met with Gorbachev in Moscow (report), for nearly two hours, then again in 1988.

In April 1991, few months before the fall of the Soviet Union, he had a curious two weeks’ visit to Lithuania, Georgia, the Kremlin and the Headquarters of the K.G.B. (report). During that voyage, he had praised Gorbachev as a “fighter”. 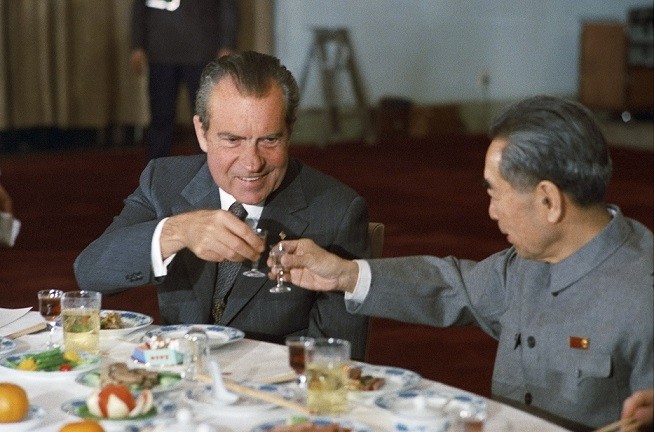 Apart from his Soviet Union trips, Nixon had also visited Cairo, Peking, Paris and Jeddah. But the synchronicity of his come-back with Gorbachev’s rise, and the 1991 trip, show clearly that he had an active role in the strategy that led to the fall of the Soviet Union.

Unfortunately, historians have not yet given enough attention to Nixon’s activities in the 1980s. We may have to wait until the official top secret documents become declassified after a couple of decades.
[embedyt] https://www.youtube.com/watch?v=XTFsoElX-a0[/embedyt]