MLB’s biggest problem isn’t pace of play, it’s teams tanking. Tanking, or intentionally losing, is corrupting the standings and the future of baseball. 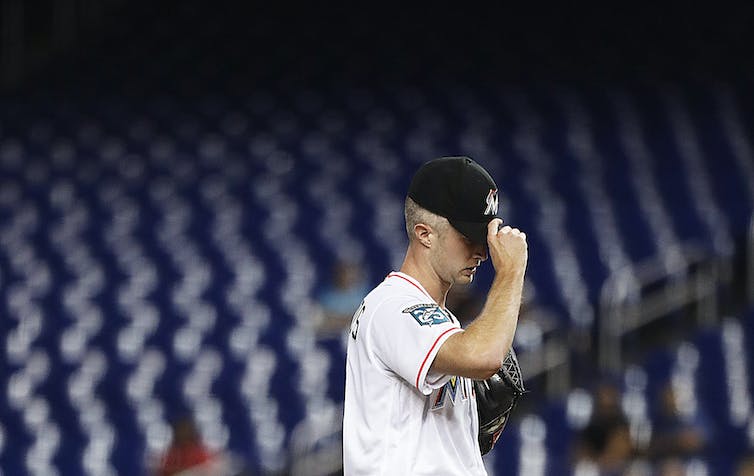 MLB is in trouble. But for all of Commissioner Rob Manfred’s concerns about pace of play, he’s looking in the wrong direction.

The game is healthy. The MLB isn’t.

Tanking – or intentionally losing – is endemic. Consider the Miami Marlins.

Since former Yankees great Derek Jeter’s ownership group took over the Marlins at the conclusion of the 2017 season, they’ve:

It’s so dire that Jeter said fans might not remember the score of this season’s games, but at least they’ll remember the ballpark experience. Not exactly a ringing endorsement for Marlins baseball.

For the Marlins, though, it’s all part of a bigger plan: lose now, save money, accumulate young talent and – hopefully – win later.

The Marlins are just one of many teams following this strategy, and there’s a logic to their approach: There’s no prize for mediocrity, and if a team, at its best, will probably miss the playoffs, why bother trying? Why not shed payroll and collect the higher draft picks that come from having a terrible record?

As a data analyst, I wanted to study the underlying factors fueling this trend. It seems that the MLB’s inequitable pay structure plays a big role.

The best get paid … less?

Let’s begin by looking at who’s been getting the bulk of the playing time in MLB since 1995. For the sake of space, we’ll focus only on batters, using plate appearances – the number of times that player batted during the season – as the metric.

There’s no trend here. For the last quarter century, players in their mid-to-late 20s have played the most. Once they turn 30, they have fewer opportunities.

Does this reflect their productivity?

Determining the best players is a bit difficult since players are good at different things. But “wins above replacement” is an all-encompassing metric that takes into account a number of discrete skill sets, from defense to baserunning to hitting.

Looking at wins above replacement, players tend to hit peak productivity in their mid-20s, before experiencing a downturn around age 30. As they approach their mid-30s, they’re a fraction of the player they once were.

So it makes sense that players younger than 30 get most of the playing time: They’re the most productive.

They must make the most money, then, right?

Wrong. Toggle between the tabs on the graph below and you’ll see that players in their mid-to-late 20s are the most productive but that their counterparts over 30 draw the biggest salaries.

A labor agreement that handicaps teams and players

This discrepancy between value and salary is due, in part, to the current labor agreement between players and ownership. Last negotiated in 2016, it has long resulted in a compensation structure that disproportionately favors established veterans.

Here’s the gist of how it works: For the first six years of a player’s career – starting when he’s first promoted to the MLB – the team that drafted him has exclusive negoti ating rights. That player makes the MLB minimum in his first three years. During seasons four, five and six, he makes 40 percent, 60 percent and 80 percent, respectively, of what he would make on the open market – a number determined by an arbitration panel if the player and front office can’t agree.

Only after a full six years of service in the majors can he become a free agent – at which point he can negotiate with all 30 teams. This competition should drive his salary up and explains why players over 30 years old tend to make the most money.

But the pay differential between a player who can negotiate with other teams and a player who cannot is so enormous that teams are incentivized to do everything in their power to keep a player from accruing a full six years of service time until it’s absolutely necessary.

Read Also: How gambling built baseball – and then almost destroyed it

Just a few weeks spent in the minors can prevent a player from hitting a full year of service time, so it’s become common practice for teams to either leave a player in the minors at the start of the season or to “yo-yo” a player between the minors and majors just long enough to squeeze out a seventh year. Teams have also started to offer long-term, below-market contract extensions to players well before free agency – sometimes before they even play a major league game – using the sub-poverty wages of minor league baseball to all but coerce a player into signing away his most marketable years.

The gap between winners and losers in MLB grows

Because teams have become well aware that most players’ skills decline once they hit free agency, they’ve been less and less likely to offer free agents lucrative contracts.

Superstars like Manny Machado, Bryce Harper and Mike Trout still make money. But a far greater number of less productive veterans lose out; their best years, after all, are behind them.

The veterans that manage to find work end up doing so on shorter contracts for lower annual value than they might’ve seen even a few seasons prior. Other players are absolutely good enough to crack an MLB roster but now go unsigned entirely.

The problem is so bad that a general manager could have put together a competitive team with the free agents on the market before the beginning of this year’s spring training, while All-Stars like Dallas Keuchel and Craig Kimbrel remained unsigned as of March 20.

That’s the point, though: A competitive team isn’t the goal. Either a team wins, or it doesn’t, and the chance to receive higher draft picks incentivizes not winning.

Essentially, most teams look at more sophisticated versions of the previous graphs to determine a “competitive window” in which they can lump all their young talent onto the field simultaneously.

The graph below looks at how varied the records of teams have been over time, a sort of Gini coefficient – a measure used to determine income inequality – for baseball.

Last season marked the highest gap between haves and have-nots in the last quarter century.

That behavior makes sense for individual teams, but it’s bad news for the league. A great way to lose fans is to lose for seasons on end. Several analyses have shown that a team’s ability to win is highly correlated with a team’s attendance. This shouldn’t shock anyone: It’s literally the plot of the classic movie “Major League.”

While each team is acting in its own self-interest, the collective trend is problematic. Whether through alienating fans or forcing a labor dispute, there’s reason to believe the league is headed for trouble.