Formula 1 companies have been reinventing themselves for the digital era and selling their tech know-how to other sectors. 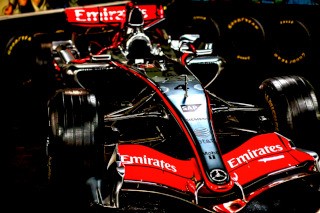 In every Formula 1 season, there are changes afoot: new drivers, tweaks in vehicle aerodynamics, revised rules and regulations. But behind the scenes, another transformation is taking place. In both the UK Motorsport Valley and the Italian Motor Valley – the two regions where the main players are clustered – companies have been reinventing themselves for the digital era and selling their tech know-how to other sectors.

Formula 1 race cars are the most technologically advanced cars in existence. Every car is equipped with 120 sensors which generate over a million pieces of information every second. This torrent of data, flowing from cars to pits, allows teams to adapt their racing strategy in real time, and is key to winning races.

The focus on processing data has turned the likes of the UK’s McLaren into a specialist in the field. McLaren was quick to make data central to the whole company, alongside the engineering expertise involved in building race cars. It set up McLaren Applied Technologies around a decade ago to sell its knowledge to other sectors, having already been successfully selling equipment to other motorsport players – McLaren has supplied electronic control units to every Formula 1 team since 1993, for instance.

McLaren Applied Technologies is in healthcare, for example, where it has developed sensors for implanting in patients who have suffered strokes, are recovering from surgery, or risk developing diabetes. These sensors collect health data for doctors to craft more personal, tailored treatments. The information is processed by wearable devices using algorithms, negating the need to upload it to a server first – which drains batteries.

McLaren originally developed these processing algorithms for units on board race cars, since under motorsport rules, sensor data can’t be sent back from the garage to the car during a race. Using similar transferable ideas, Applied Technologies is also involved in everything from train wifi facilities to optimising air-traffic control to performance enhancement for elite athletes.

Italy-based Dallara Automobili is another motorsport company branching into new areas. Though not a household name, Dallara has almost a monopoly in supplying motorsport chassis to clients including Ferrari, Haas, Maserati, Bugatti, Honda, Lancia and Renault.

Like McLaren, Dallara’s move beyond motorsport coincided with an internal digital transformation. Much of this has been linked to the virtual process Dallara developed for testing chassis. Where the company used to endlessly test prototypes on race tracks and wind tunnels, now it models a car’s surroundings using supercomputers that accurately simulate weather and track conditions. Where testing used to take three years, it now takes closer to nine months.

Andrea Pontremoli, the chief executive who arrived from IBM in 2007, has sought to turn the Italian manufacturer into a “knowledge company”, building a fluid project-based organisational structure to make the most of the technical expertise. A substantial number of new hires are mathematicians and data scientists.

Dallara now offers consulting services in aerodynamics and vehicle dynamics based on its supercomputer-powered simulations to manufacturers of everything from cars to military jets. It has also leveraged its engineering expertise in carbon fibre to create lighter factory robots for the likes of Coca-Cola, while other clients have included the Honolulu metro system.

How to transform Formula 1

For both companies, there are signs these moves are paying off. McLaren says Applied Technologies has doubled in size in the past five years, and believes it will be a “major engine of future growth”. The division will have turned over around £60m in 2018, and recently hired former Qualcomm senior executive Anthony Murray as its chief executive.

Dallara has tripled its number of staff in recent years and is seeing strong demand from the market for its new digital products and services, Pontremoli told Benoît Leleux in an interview. Both companies have gained insights in their specialist areas by co-developing new technology with their clients. Pontremoli says Dallara’s unofficial policy is to choose customers that will allow the company to acquire new knowledge, as opposed to customers that will net high profits.

It is easier said than done to move in this kind of new direction, however. The vast majority of companies who try to undergo digital transformations struggle. Take Ford Motors, which set up a Smart Mobility segment nearly three years ago to focus on how the internet, is revolutionising the car industry. It oversees the Ford SYNC app, which allows drivers to remotely access information about their cars, as well as experimenting with smart parking and driverless cars.

But Smart Mobility has failed to change the company, arguably because it moved too slowly and was not central enough to Ford’s core business – unlike in the case of McLaren and Dallara, who have both seen digital transformation as a fundamental organisational shift. Ford’s share price has fallen almost 50% in five years.

General Electric, another American juggernaut, has spent billions of dollars failing to become a leader in the industrial Internet of Things. It identified the opportunity to use sensors on machines to gather data early, but badly underestimated the cost of developing solutions in this area. Its industrial internet platform, Predix, faced delays and technological issues and struggled to compete.

When it comes to getting such shifts right, we need to be wary of saying you can simply write a recipe based on what has worked elsewhere. Clearly, however, there are likely to be rewards from spotting opportunities early, and recognising that the culture may need to change right across the organisation. Firms commonly make the mistake of believing that product innovation is all that’s needed to become a digital player, but those who succeed also change the way they bring their offerings to market, form new types of partnerships and join different sectors.

Both Dallara and McLaren have benefited from understanding what clients need even though they are in other sectors, which is partly about having a clear understanding of your core competencies. Equally, you need old-fashioned business skills like hiring the right people and correctly foreseeing things like demand and costs. What these motorsport companies demonstrate is that the new digital world can be an opportunity for transformation, and a means of developing entirely new business streams at the same time.