SIR OSWALD MOSLEY AND THE BRITISH UNION OF FASCISTS 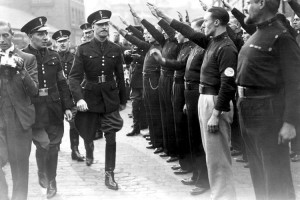 This photo was not taken in the Nazi Germany. It shows the MP Sir. Oswald Mosley, during a parade of the British Union of Fascists in the 1930s. Throughout his career, Mosley explored the whole political spectrum, from the extreme left to the extreme right. This photo illustrates his Fascist episode with the Black Shirts. The uniformed and military-style organisations were later banned by the British government. After the war, Mosley formed the Union Movement, calling for the unification of Europe under one super state.